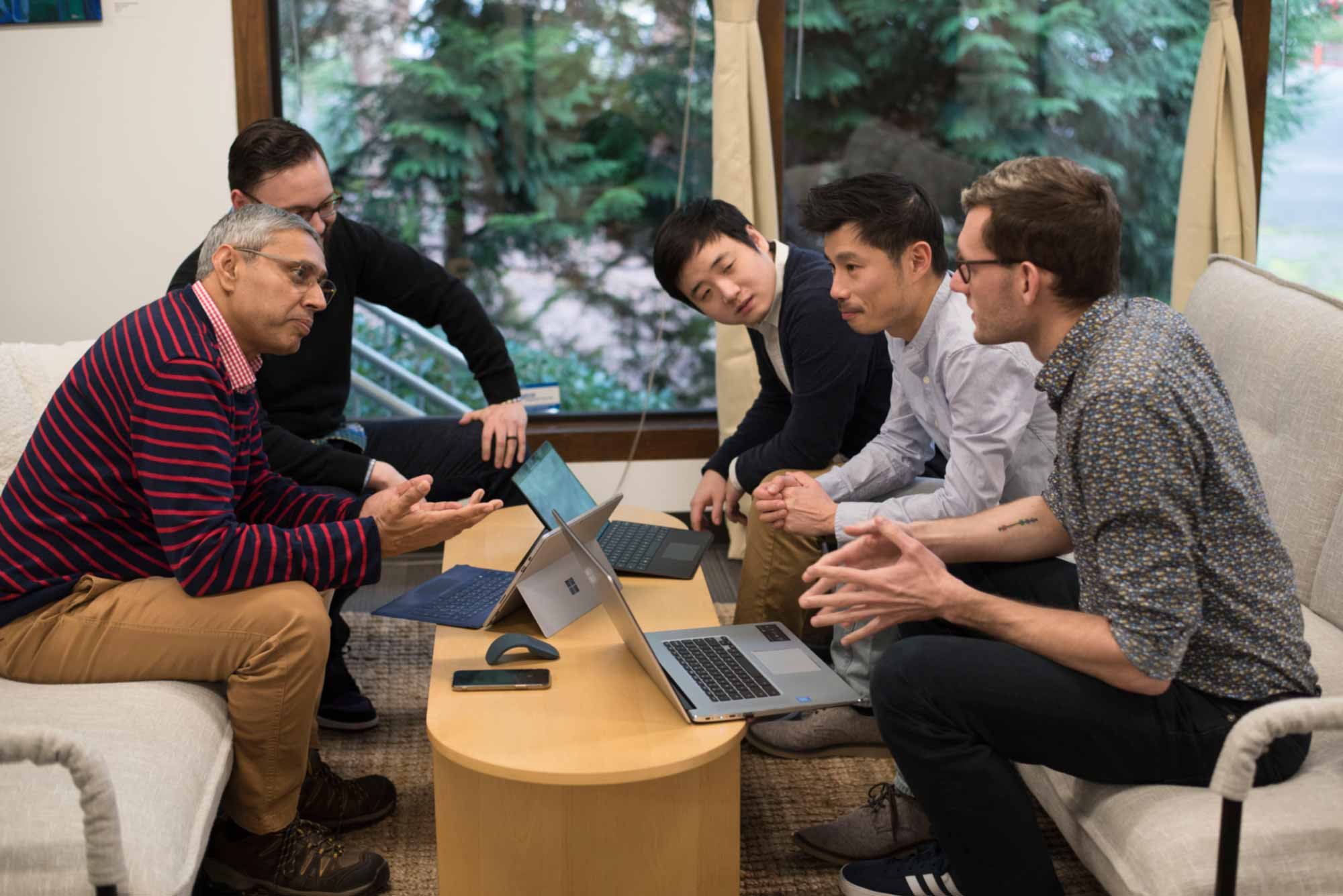 When I joined Caravel Labs full-time as the CEO this time last year, I received all kinds of conflicting ideas and advice on what that job meant. One of the few consistent ones was that I was required to be the principal spokesperson and that I must have an elevator speech and a tagline. A year later, the phrase above is my tagline, and as for the elevator speech, if my life ever depended on delivering it, I would beg one of the half a dozen customers that we have had the honor to work with since I joined, as they tell our story so much better than I can ever do. But coming back to the tagline, I sincerely believe it represents not just the co-founders but most importantly, the people we get up every day to serve, and those bright minds who have joined our movement since, flung across the world, the long way from Seattle to Taipei.

The problem with a tagline that uses a word like “innovator” multiple times, is that the word has been overused to the point it is almost a cliché and means so many things to so many people that it means nothing to most people. I could have done worse with phrases like “common sense” and “mother’s love” instead of “innovators”. The specific interpretation of the term is easier to describe and once I have done so, the rest will follow. I have therefore split this post into two, the first one expressing thoughts on innovation with some examples of real-life people, a small subset of our customers, followed by another one where I dare to speak more directly about why Caravel Labs was built, what we do, and how we are different.

How does one define an innovator? The Oxford Dictionary defines the innovator as “a person who introduces new methods, ideas, or products”. Pioneer, groundbreaker, trailblazer, pathfinder, modernizer, and reformer, are just a few of the synonyms ascribed to the word, a good indicator of how much we respect innovators, or at least their finished product, as they seek to solve, or at least improve on, the hardest, most intractable problems for real people. Perhaps the most noteworthy distinction is that they actually implement their ideas, not merely imagine them. It is no surprise that the Nobel Prize announcements garner such interest. After all they are meant to celebrate the greatest innovators of the day in a variety of fields.

Innovators are changemakers. They are passionate about the human impact of the problem that they undertake to solve, find inspiration often in a completely different domain and look for ways to employ their inspiration on the problem that they are pursuing. They are non-conformists by definition. Conformance to the status quo doesn’t lead to change, or innovation. As Albert Einstein famously said, doing the same thing over and over again and expecting a different result is insanity. Additionally, to quote Niccolò Machiavelli, “There is nothing more difficult to carry out, nor more doubtful of success, nor more dangerous to handle, than to initiate a new order of things. For the reformer has enemies in all those who profit by the old order, and only lukewarm defenders in all those who would profit by the new order”. In other words, innovators have few initial supporters and start with little other than inspiration, passion and resolve. They persevere through failures, are willing to face indifference, ridicule and persecution for their ideas, and slowly build up their influence and resource pool as they make their way to their eventual genius status. The journeys of their innovation serve as stories of great inspiration. This is why, besides, Nobel Prize wins, the greatest innovators are also celebrated in biopics.

Where do we find innovators? They are everywhere, although they are always a minority. They can be found among “startup founders”, social entrepreneurs, international aid organizations and NGOs. Many of them are government bureaucrats and military leaders, and quite a few are executives at multinational corporations. One can tell them from their eagerness to act. They are not content with simply imagining a better future, they pursue their vision until it is a reality. In the course of our careers, the founders of Caravel Labs have found them on each of the 24 countries that we have worked in on every human-inhabited continent on the planet. Each of the many innovators in the corporate, government, academic and entrepreneurship space that I have encountered in my professional career deserve an article of their own. For now, here are just some of the recent innovators that Caravel Labs had the honor to serve.

Animesh Chowdhury, the founder of Parental Care India, has chosen to address the problem that 1 in 7 elders in India face reduced healthcare access due to solitary living, not by advocating building more elder care facilities (by others) or by arguing that the numbers don’t tell the full story, but by reframing the question to how to elevate care coordination as a profession to improve healthcare access to solitary elders.

Jamie Martin and Sandeep Mallareddy, founders of the education tech company Queen’s English, addressed the negative impact of the lack of spoken English proficiency on employment opportunities, not by advocating for either creating more jobs that don’t require language skills, in other words machine-related jobs that are always vulnerable to automation, or by taking the elitist viewpoint that English medium education is already available and people should “cut down on expenses” to send their children to better, private schools. Instead, they went about building an English education system that is affordable for learners and lucrative for teachers around the world.

Kyle McFarland, Cliff Bridges and Anthony Sadarangani, founders of the fashion tech company Stylecard, pondered on the problem of why 40% of clothes end up in garbage unworn, and rather than succumbing to the false binary of focusing on reducing consumption or improving quality, they attacked the problem reducing the waste from incorrectly ordered clothes through improved size and style selections by providing highly accurate body measurements.

How do innovators innovate? The answer to this question lies in the common journey of the innovators mentioned above. Their personal experience and professional expertise drove their passion to take on a big, sticky problems that impact the well-being of a large part of humanity. They explored beyond the well-established doctrines within this problem domain and spent significant effort and willingly spent resources available to them to validate untested ideas. They then built their “product” and were able to achieve the intended impact within the space that they initially targeted. Last but not least, they invested in building a nimble platform that could adjust to the rapidly evolving environment which is a key ingredient to expansion to the widest surface area possible. It is not surprising that within just a few months, they have managed to build resilient, sustainable businesses, well stocked and poised for the next big leap in their journey.

How do innovators use technology? Technology by itself does not drive innovation, but it is a powerful and essential tool that innovators need on their journey of innovation. Since the innovators’ journey is always uncertain and full of pitfalls, the speed with which ideas can be tried out and learned from determines the extent of the scale to which the innovation will have impact. And this is precisely where technology plays a crucial role. It allows the innovators to move forward with short, quick steps, as well as to step back and aside safely when they encounter a dead end or a precipice. When Neil Armstrong famously said standing on the surface of the Moon that it was but a small step for (human) but a giant leap for (humankind), he was paying homage not just to the technological advancement of NASA’s Apollo program but to all the technological tools that humans employed starting perhaps with the flint stone to light fires at will, almost 60,000 years ago when the first human ventured out of the Rift Valley in Africa. Even as the first humans standing on a different celestial body, Armstrong could not have predicted the technological advancements of 2021. However, it is the human innovator that gives meaning to the technology in question, and not the other way round. In working with innovators, Caravel Labs engineers build mobile, web and IoT applications, use artificial intelligence and machine learning, as well as contribute to cutting-edge advances in speech recognition, secure document management, video conferencing and image processing, and as eyepopping as these technological advancements are, they are meaningful only because they serve to increase the impact of the innovators that we work with.

The innovators, it is evident, drive the necessity which is the mother of all technology inventions.